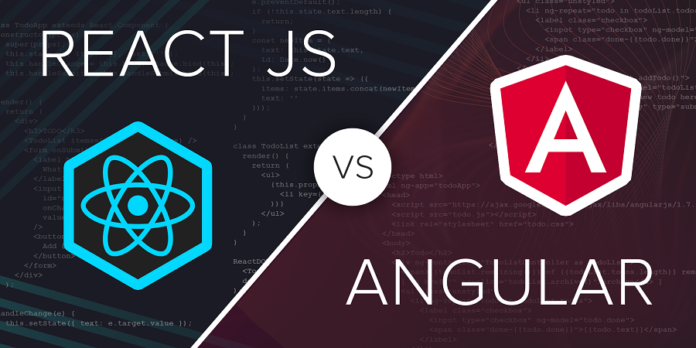 Web development has been changing at a fast pace. Many front-end frameworks have been ruling the technology world with the latest trends and techniques increasing.

There are a plethora of options to choose from amongst the javascript platforms like Angular, Vue js, and React that can make your front look spectacular. The ultimate deciding factors as to which framework would best suit your requirements depend on the project you finally want to launch. The trends and technology seem to make your decision biased, but you must take the right decision before you choose the one.

In this article, we will analyze the features of both Angular and React to come to a detailed comparison between the ruling frontend frameworks. Let’s do it.

React offers scalability and usability as it helps in making the best possible use of reusable components. React is a product of Facebook and it exhibits the best properties of building fast and scalable apps.

Angular is a product of Google that provides the best MVC (Model View Controller) technique in such a way that it divides the work into logical pieces while speeding up the webpage loading time.

As the data speaks out of google trends, react wins the race as the most popular in terms of searches. Also, React grabs the position of the most widely used web framework by developers worldwide.

Angular on the other hand has also a good majority of developers as it focuses on high-speed apps that are trending today. Also, it offers many ready-made easy-to-use solutions.

Angular makes use of two-way data binding, wherein any change in interface elements leads to a change in model components also.

React on the other hand uses one-way data binding as it renders modifications in its interface model only as the model state is updated first. It must be taken into fact that data flow is unidirectional by giving more control to react js developers over web applications

The app structure of Angular apps is fixed and complex. It enables the developers with an easy application as it provides the code into individual files making it easier to use templates and codebases. It makes use of components like Model, View, and controller.

React on the other hand has a fixed well structured codebase that doesn’t require any particular fixed formatting. The component tree makes it organized logically. It makes components declarations declarative by making use of functional programming.

As virtual Dom trees help to lower the loading time speeding up the performance for React making it more performance-oriented than Angular. Also, it reduces workload as the data binding process in React is unidirectional.

On the other hand performance in angular is proportional to the bidirectional data binding process. This may lead to hindering the performance of Angular due to its looping.

So Angular or React

Both angular and React exhibit the best properties of frontend framework but React grabs a better position as it promises performance with optimization and has a huge back from developers all around the world.

Also react supports Virtual Dom and hence enables the developers to switch to different versions without any difficulties. It has an easy installation process and is much simpler than Angular.

React also wins the charts with its less development time and robust solutions that eliminate errors. In the nutshell React with its stupendous features is adored around the world by developers as it provides the best functionalities and features on any web app. Still, in doubt, contact our expert react js developers to help you choose the one best suited to your needs.

8 BEST AND FREE AUDIOBOOK APPS TO LISTEN TO IN 2022

Mac Memory Usage: How to Check It and Reduce It

When Do You Need a Personal Injury Lawyer?

If you've been hurt through no fault of your own, you may benefit from the assistance of a personal injury attorney. These legal experts...
Read more
- Advertisment -

Why Your Small Business Should Care About Local Seo?

This is how the story goes - if you have a small business, you want people to know about it. The best way to...
Read more

To streamline task automation, it is important to have a clear and concise plan for your automation framework. You can develop an effective system...
Read more

The 7 Most Essential Items At Your Work Desk

There are a lot of things that you need to have on hand to stay productive at work. There's the obvious stuff, such as...
Read more

Benefits Provided by An Electric Scooter for Sale!

EVs are a must-have today. As never before, there is a desire for various fuels to be used for transportation. However, one option is...
Read more
Load more