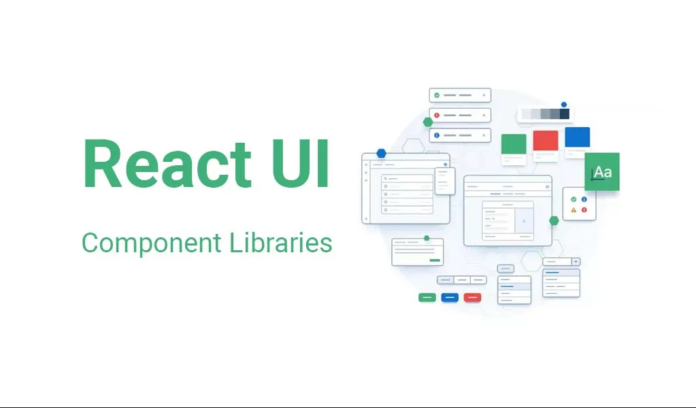 React is a JavaScript library that is considered among the top front-end technologies and is proficient in addressing the varied UI needs of modern applications. It won’t be wrong to say that with its productive tools and features, it has and is still changing the dimensions of web UI development. Another big reason for React’s prominent reputation is its frameworks.

React is a developer’s choice when it comes to the creation of interactive, attractive UIs with minimum hassles because of its declarative views, easy debugging solutions and component-based architecture. But for better iteration and faster results, React UI frameworks are required. While there are many names to pick from, there are a few which are worth working with.

This post curates a list of the seven remarkable React UI frameworks which amplify UI development with their remarkable set of features.

React MD library is great for building dynamic user interfaces. It has built-in support for RTL languages and offers a configurable theming. Its notable feature is updating themes dynamically with built-in validation.

In addition, it comes with warning messages when the mix-ins and functions are used incorrectly. Its other noted features include:

React Bootstrap is practically as old as React itself and is regarded as one of the most popular and evolved UI libraries for React. This UI library is considered more reliable since it re-implements BootStrap components by using React and doesn’t depend on jQuery or bootstrap.js.

Once you install React–Bootstrap with React setup, you have practically everything that’s required to build a functional UI. The features that make it more appealing are:

Empowered with powerful building tools and top-notch features, Grommet is popular as the elite React-based framework which makes UI development classy and quirky. It comes with an array of highly productive theming tools and provides support for almost all devices which makes it responsive as well.

Grommet is used by some big players of the Internet world including Netflix, IBM, Samsung and HP which speaks plenty about its efficacy. Let’s have a look at some of its highlighted features which are:

Belle is another adept React library which supplies developers with configurable components, is easy to use and offers APIs that work consistently across all components. With Belle, developers can work with a comprehensive set of React components including Rating, Button, Card, Toggle and TextInput. Belle has encapsulated components and that helps developers in the creation of a great UX.

Compared to other React libraries and frameworks, Belle is still growing but it is appreciated for its active feedback and high performance. Its other useful features are:

Chakra UI is a developer’s go-to component library when it comes to the creation of fast, functional and good-looking user interfaces. It is known for easy styling and customization, availability of pre-built components for speedy development, and its tools to enable developers to compose their own components.

It is also loved by React developers for the availability of modular React components which make for clean coding. Also, it has an easy learning curve and an easy setup. Other significant features of Chakra UI are:

Evergreen is an elaborated design system built on React.JS and contains an extensive set of out-of-box React UI libraries. It is loved by developers for its rich collection of plug-ins and toolkits which result in the development of elegant UIs. Because of its richness in technical ecosystems, Evergreen is considered fitter for creating enterprise-grade apps.

Its components are known for their resilience, agility and a high degree of customization. The visual design elements of this flexible UI framework are informed via iterations done by its adept design team. Some exclusive features of this exclusive framework are:

Rebass is one of the best React UI libraries, and it is known for its styled system, responsive styles and an extensive ecosystem of tools to work with. The provision of user-defined scales and design constraints helps developers create a consistent UI. It comprises an array-based syntax, has a minimal footprint and is flexible enough to support the development of complicated designs.

It features detailed and impressive documentation that helps developers see through their projects and requirements. It is favoured by developers for its scalability, systematic guidelines and responsiveness. Other notable features of Rebass include:

Semantic UI is an impressive development framework that rightly explains the importance of interface with a single sentence on its site: “User Interface is the language of the web.”

The official plug-in to work with React.JS web development is Semantic UI react. This library comes with a complacent collection of over 50 components including pagination, transitions, segments, button and containers.

It offers impressive theming capabilities and is loved for simplifying the ordeal of UI development. The remarkable features that offer Semantic its popularity are:

When it comes to UI designing and development, React.JS sure has a lot to offer. But its features and tools are not its only strong points. The abundance of React UI libraries is another one of its advantages. With so many libraries to work with, a developer can always find ways to augment UI development.

The eight libraries mentioned here give ample freedom and control to developers and ensure that they are used in the optimum ways. Some of the libraries, however, are a tad more complex to work with. You can partner with an experienced React web development company and extend your in-house team for the creation of majestic, modern and intricately detailed user interfaces.

Nowadays, you can see an android phone in everyone's hand. Without a phone, it seems impossible to go out. The number of mobile users...
Read more
- Advertisment -