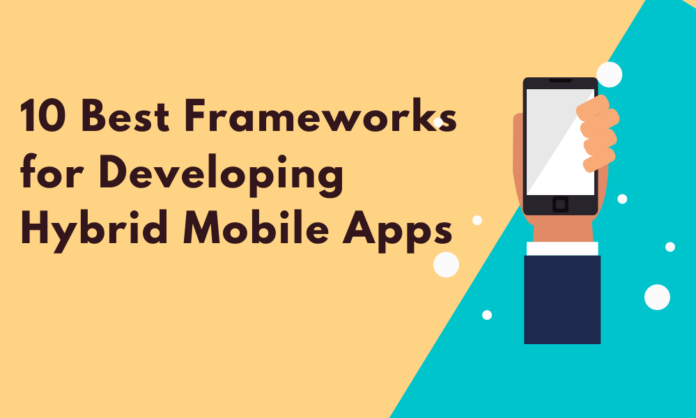 According to Tim Berners-Lee, “Data is a precious thing and will last longer than the systems themselves”. This statement explains why most companies are turning towards hybrid mobile applications from websites. These web applications merge Java and HTML5 technologies together in a Native container.

Here’s a list of the 10 best frameworks that will enable you to develop Hybrid applications in the best possible manner.

React Native receives its support from both React and JavaScript and is primarily used for developing Native applications. It is not believed to be the ideal option for beginners as one needs to get used to it.

However, there are several free online tutorials to know the ins and outs of using it both at the basic and advanced levels. You can find useful information about how to use this framework in these tutorials. Also, you can reach out to its active community for technical help or assistance in connection with using the framework.

Ever since its inception, Xamarin has been growing in popularity. Currently, it has become one of the popular frameworks for the development of Hybrid mobile applications. More and more companies are gravitating towards it as it provides an easy option for companies to test the applications.

It operates on the write once, run anytime principle. It has become the hot favorite option for professionals owing to its ability to allow the codes to be reused. Hybrid App Developers who work with this framework can use 70% of the codes once again between the Android and iOS platforms. This way it saves the precious time of developers by cutting down their workload.

The Ionic platform involves CSS and needs the collaboration of other platforms such as Angular JS to perform up to the expectations. However, the combination of both these platforms can work wonders in boosting productivity.

One of the major advantages of employing this framework is that it cuts down your effort for taking additional actions. You can rely on this framework to develop applications when you do not have a lot of time to invest in a project. If you have been looking for a reliable framework to create extraordinary mobile apps, then this is the right choice for the purpose.

Using this framework is easy for both beginners and pros alike as its documentation explains the ins and outs of how to use it with several examples.

Developers who prefer to use either Angularjs or Bootstrap in the development of Hybrid mobile applications prefer this framework. Another reason for which it takes precedence over the other options is its independent nature from the use of extensions and libraries of other sources.

Developers value Framework7 highly for being an independent framework and its stable performance. It neither depends on Angular JS or React. Still, it has the best styling and animation components to help you create mobile applications with the appearance of Native apps.

All you need to utilize this framework in the best possible way is a sound knowledge of HTML, JavaScript, and CSS.

jQuery Mobile is one of those frameworks that work on different platform-specific environments without losing its actual attributes. The best part about this framework is that it meets the expectations of developers without adopting a native appearance.

For developers who need a reliable mobile application development framework for multiple stores, there is no better option than Intel XDK. One of the highlights of this framework is its support for the development of cross-platform applications.

Ever since its inception in 2019, the Flutter framework has been doing rounds in the app development circles for its impressive features. Despite not being a new framework for the development of mobile applications, it has been able to grab the attention of developers.

One of the major plus points of using this framework is its support for all operational systems along with its customization features. What’s more, it is open-source. As such, developers can employ it for the development of applications without being worried about the price factor.

However, it is expensive in comparison to the other available options for the development of applications. That said, it brings the wealth of mobile app templates in a ready-to-use mode.

To sum up, developers have several frameworks for the development of Hybrid mobile applications and for moving data from web to applications. A developer can make a choice based on the needs of a hybrid app development company. The alignment of the features of these apps with the needs of the latter is the sure-fire way to make an informed choice.

James Grills
James Grills is associated with Cumulations Technologies, a leading Artificial Intelligence app development company. He is a technical writer with a passion for writing on emerging technologies in the areas of mobile application development and IoT technology.