Native vs. Hybrid App Development: How to Make the Right Choice? 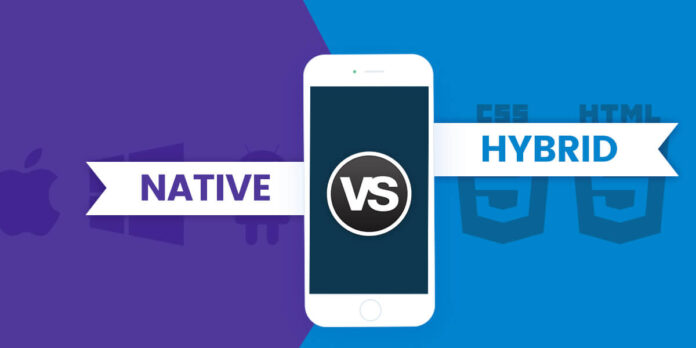 If you want to create a successful app, you need to keep in mind numerous development aspects and make a lot of considered decisions. Choosing the right development method is one of the most important decisions, and you need to choose wisely.

We’ll talk about native and hybrid app development methods in detail and find out in which situations they will be the most suitable.

But what’s the main feature of hybrid apps? Hybrid apps are developed using CSS, JavaScript, and HTML together. In simple words, hybrid apps are websites made to look and work like native apps. Besides, hybrid apps utilize the same codebase for multiple platforms and use cross-platform capabilities. 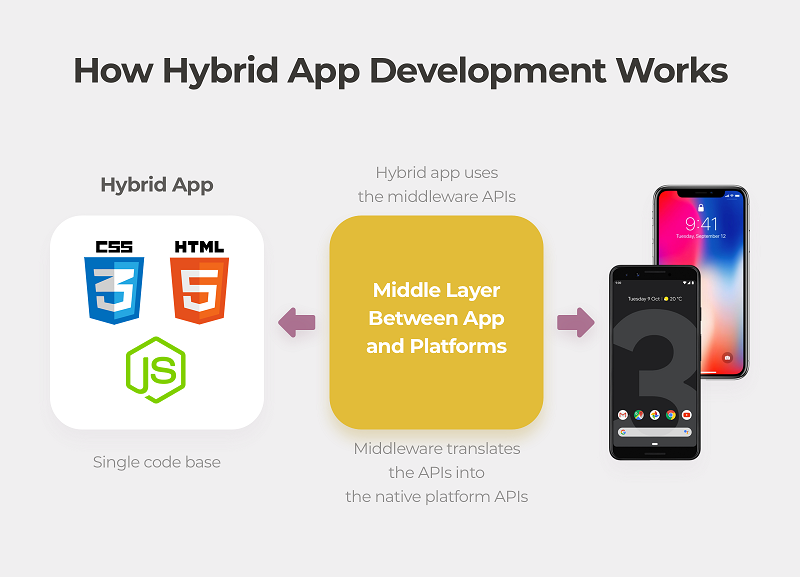 Hybrid and native apps can be placed both on Google Play and App Store.

Strengths and Weaknesses of Hybrid Apps

Before choosing a hybrid app development, you should discover all pros and cons of this method. As we already know, hybrid apps are websites packed in a native shell. This means that to access native features, hybrid apps must utilize specific APIs. Moreover, hybrid apps fit various content-based apps perfectly, but if you want to build something more complex, it would be much harder to develop with a hybrid approach or impossible at all.

Now, let’s talk about all nuances that you should know before choosing hybrid app development.

It’s a huge advantage of hybrid apps since you don’t need to develop several apps for several platforms. Hybrid apps can run both on Android and iOS thanks to the single codebase. This advantage will come in handy if your primary goal is to cover as much audience as possible.

It’s much faster to create a hybrid app than native one since developers need to create only one codebase, and there’s no need to develop different codebases for different platforms. Furthermore, app testing is also faster and easier thanks to this advantage.

This advantage is also related to one codebase. Developers can focus on it, and they don’t have to work with every platform separately. Implemented changes will appear on every platform simultaneously. Besides, bug fixes won’t force users to download big updates through the Google Play or App Store. Any fixes made on the page loading from the server will appear the next time users open the app without any update downloads. 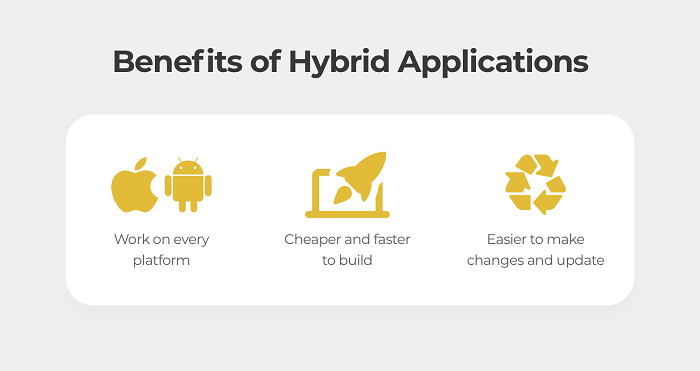 When it comes to user experience, hybrid apps are not the sharpest tools in the shed. App design must satisfy both Android and iOS users, and if you pay more attention to one platform, another platform may suffer.

This may seem odd and unlogical, but it’s true. The hybrid app development method can’t manage all problems that are basic for native apps. So to build a hybrid app properly, you’ll need a native app developers in your team.

Strengths and Weaknesses of Native Apps

Native apps are developed for a specific platform with adherence to strict guidelines of that platform. These guidelines are crucial and must be followed to deliver excellent user experience within the platform. Now let’s discuss all advantages and disadvantages of native apps. 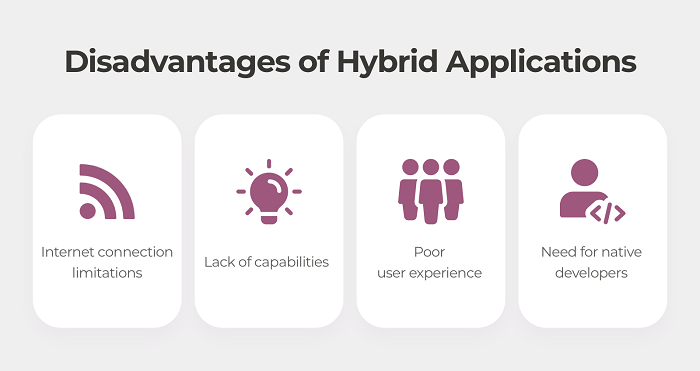 As in the case with hybrid apps, we’ll start with positive sides.

This advantage is a cornerstone of native apps. Thanks to an orientation on one platform, UI/UX designers, along with developers, can focus all their attention on one app and polish its design. Moreover, developers can make all features independent from an internet connection, which increases overall user experience.

Native apps are overtaking hybrid apps in terms of performance as well. The reason for that is a codebase made with programming languages that are officially supported by platforms. Furthermore, don’t forget that developers are dealing with the optimization process. Managing battery and memory usage also influence overall app performance.

Only native apps can guarantee a high level of security due to all hardware power engaged in processing tasks while hybrid apps lack such features.

Native apps are not limited to third-party tools and have full access to databases and native features. Furthermore, there are no strict limits in interface creation due to no need to manage various peculiarities of several platforms to meet each one of them.

Native apps provide a straight development way without fragmentation on multiple platforms and complicated process of layout adjustment for multiple platforms. This helps to provide users with high-level design and, as a result, perfect customer experience. 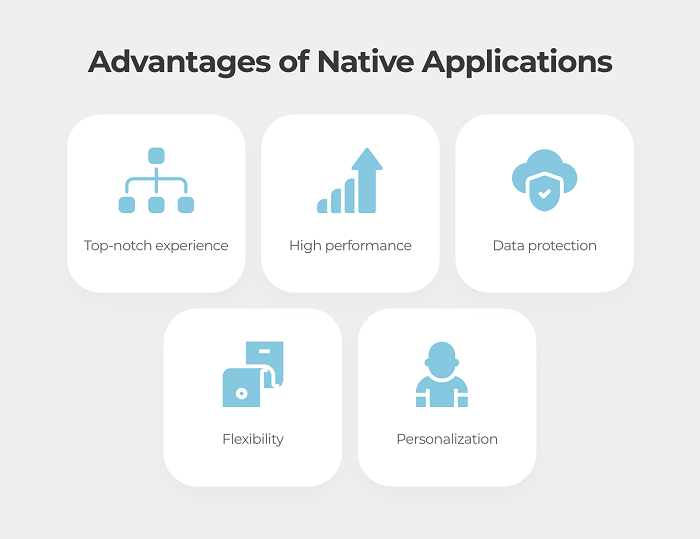 Now it’s time to consider the disadvantages of native apps.

It takes more time to develop a native app. If there’s a need to create native apps for Android and iOS, be prepared to engage in simultaneous development. 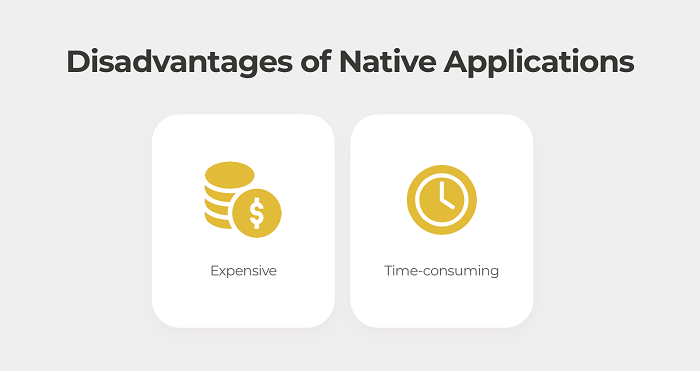 When to Choose Hybrid or Native App Development

The best scenario of choosing a hybrid app development is when your budget is very limited, and your goal is to cover the audience on several platforms in a strict time frame.

In case you want to focus on one specific platform, you better choose a native app development. Moreover, the native app is your choice if you want to deliver the best user experience using high performance and perfect design.

Vitaly Kuprenko
Vitaly Kuprenko is a technical writer at Cleveroad. It’s a web and mobile app development company in Ukraine. He enjoys telling about tech innovations and digital ways to boost businesses.