Master Of Reality: The Main Differences Between Augmented And Virtual Reality 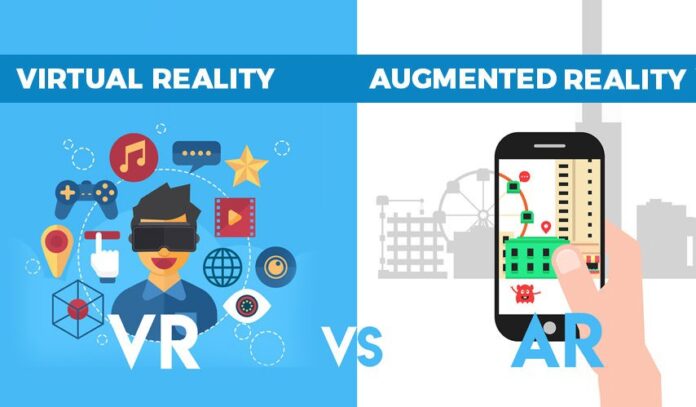 From Tron to the Matrix, virtual and augmented reality concepts were the preserve of sci-fi fantasies for the latter decades of the 20th century. However, as computing and processing power has increased and sophisticated mobile devices become the norm in every pocket, we are seeing the fruition of decades of theorizing about virtual reality.  Yet as virtual reality and augmented reality move from the exclusive realm of science fiction and begin to be incorporated readily into real life, the distinction between these two concepts tends to become blurred.

These two terms actually describe fundamentally different approaches to the way that immersive technology can adapt reality to provide new, higher-level experiences for users of these technologies. In this article we’ll explore the main differences between augmented reality (AR) and virtual reality (VR), so that you’ll know your Pokemon Go from your Oculus Rift.

What Is Augmented Reality?

In 2020, the most prevalent example of augmented reality tech is the craze of Pokemon Go which took the world by storm in 2016. Ever since then it has become increasingly normal for people to point to blank patches of the world and exclaim excitedly that there’s something there, beyond the bounds of normal perception.

Augmented reality means that technology is overlaying digital information on the real world to create a tiered perception that uses true reality as its fundamental base. On top of this reality (the “real” world), things such as Pokemon or other digital characters can sit. Augmented reality isn’t a completely immersive experience as it relies on traditional perception and physical reality for its background, and digital information sits in the real world as on a stage. Reality can be augmented in this way via a range of technologies – smartphones and other mobile devices, AR glasses or heads-up displays.

Augmented reality is useful for more than just putting Pokemon in the real world. All kinds of graphics, text and other informative tools can be overlaid on our reality, for a variety of reasons. For example, IKEA developed an AR app that customers can utilize through smartphones that projects IKEA furniture on the app users’ living spaces, allowing a better visualization of how the design will work in their homes. Or imagine taking a guided tour of a museum, with details of sculptures and paintings overlaid in three dimensions across the exhibitions. Augmented reality can add a layer of digital information to the physical world and used in economic and leisure environments.

What Is Virtual Reality?

In contrast to AR, which as we have seen takes the real world as its fundamental background, virtual reality has no relationship with the real world. In virtual reality, the entire environment is digitally generated, and it’s this new virtual landscape in which users become immersed. VR is most commonly entered into through the use of a headset which simultaneously projects the virtual landscape, whilst estranging users from the real world to which they were formerly attached. Usually that headset will be attached to computer which does the processing work in generating the digital landscape, but as VR technology progresses there are now standalone headsets such as Oculus Go, with inbuilt processors.

VR was initially conceived as immersive gaming environments and entertainment was the dominant function of this technology. However, innovators are now conceiving of the application of VR more broadly and engineering, military and health sectors are adapting VR to their needs. For example, VR can be used in a military setting to simulate training exercises without the need for active work in the field. Surgeons can use virtual environments to plan a surgery before even lifting a scalpel.

As virtual reality becomes more sophisticated the applications become enormous. The virtual world can offer simulations and training exercises at a fraction of the cost – or risk – that would be entailed by undertaking these activities in the real world.

Virtual reality and augmented reality, therefore, fundamentally differ in how they either utilize or reject the real world as a part of their technology. Augmented reality has many applications in commercial environments whilst virtual reality creates powerful opportunities for training and teaching in simulated environments. What we can say for sure is that although these technologies were originally conceived as tools for gaming and entertainment, they have far outstripped these possibilities are likely to be encountered in every corner of life in the future.

Michael Dehoyos
Michael Dehoyos is a web developer and editor at Write my literature review. He writes about science, technology and futurism and is constantly excited by the possibilities presented in virtual reality technology.