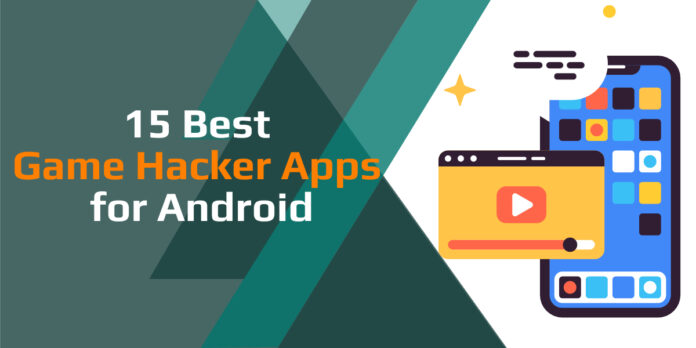 Game Hacking is very popular practice in ethical hacking and penetration testing. This Game hacking application for Android is important to test your online game security.

If the reader is a core gamer, a frequent and updated player, and wants to advance their level as players, this particular article is a must-read for them. This article talks about the different apps that help the players crack through the versions and discover more about the games.

In this article, there is an elaborate discussion on what is game hacking, and the 15 top game hacking apps for Android.

What is Game Hacking?

Technology has taken such a special position in our daily lives; we have been dominated and controlled in every sphere of life by this scientific innovation. Entertainment has gone completely tech-based; there is another thing that has becomes completely virtual.

Online games have become one of the most used leisure tools by people. There are different versions of online games. Some are free; some has both online and offline mode of playing. Again some others are only possible to play with internet connections.

People of different ages become so addicted to the games that they can barely take the normal versions of the games; they want to break into other levels. These are possible only by different sorts of technical tools. The method is called hacking.

About Hacking and Apps-

Hacking is a kind of cheating that is not a fair game. However, it has become a trend. With this process of hacking some players can become more powerful than the others which helps them win the game as they can operate them on their Android devices.

This allows the players to use mods to score better and ease up the level crossing. The best part of hacking is with the help of this, one can download a paid game on their Android devices for free.

However, not every game is possible to be hacked. There are mainly two kinds of games- one is client-side games where all the information regarding the game is stored in the Android device of the user. The other one is the server games, where the game data are saved in encrypted form at the dedicated online servers.

The former one is easy to hack game while the latter one is quite difficult to hack and mostly impossible because of their regular modifications.

In market, the most popular Android game hacking app available is HackerBot. At the official website, Hackerbot.net, one can find different working hacking apps for famous games like Call of Duty Warzone, PUBG, Pokémon Go, Minecraft, and many more.

Pros: It helps the gamers advance through processing in-game cash, extra lives, and amplifying scores. The players can also search for the cheat of the game they want to hack; they can also choose the types of hacking as well.

Pros- It is the best app that can hack all possible player games with ease. After downloading, it applies certain patches to the game to manipulate and control the game to the player’s advantage.

Cons- It works only for the rooted devices. It is not available in the Google Play store.

Cheat Engine has been keeping up its reputation as one of the most useful and friendly game hacking apps for Android games for a while.

Pros: With its regular and periodic modifications, it can manipulate famous games and applications. For single-player games, the difficulty setting and the debug issue can be resolved with this cheating app. It can be used for speed hacks, 3D manipulations (direct), system inspection, assembler as well as dissembler, and more. There is an in-built tutorial as well.

Among all the free game hacker apps for Android, Game Guardian is one.

Pros- Game Guardian can be used on both old and new Android phones. It is also adaptable to rooted as well as non-rooted devices as well. Its extensive features are 100% free. It is used for multi-purposes, to amplify the game speed, money, health, coins, and many more.

Cons: This app has significant limitations when it is used on a non-rooted device. Besides, this is not available in the Google Play store; one has to go to the official website to download and use it.

This is another free app for Hacking Game that is possible to be downloaded and used on Android devices to advance the gaming options.

Pros: With this app on the phone, one can unlock game cash, advance to the next levels, coins, and other exclusive items in the game.

Cons- It is only available for the rooted devices. It requires an Android OS 2.3 version or later versions also with a minimum memory of 512 MB RAM.

Nox is one of the best hacking app for Android games to ease out your gameplays by hacking them.

Pros- It allows the user to remap the controls of the game according to one’s favor. This feature makes the game faster and more efficient.

It is the best game hacking tool for the PC users of this and the previous generations.

Pros: It is another popular PC emulator. It makes the gaming distraction-free and takes it to the next level. For that, it uses the least amount of memory along with lower CPU usage. All these improve the gaming standard and performance.

Cons: it is not available in the Google Play store.

It is again a very apt competitor for this purpose and an equally good app to use for Android users to enhance their gaming performances.

Pros: This app allows the users to hack and modify most of the online and offline games according to the user’s advantage.

Cons- It is only available for the rooted devices only.

If the player is planning to use a free app to advance their gaming options, this Creehack app is the best to find.

Pros: It allows the player to crack almost any Android game. Besides, with it, the player can avail of many in-app purchase facilities without even spending a single penny for it. Also, it is available with differential and adaptable features for both old and new Android smart phones.

Cons: Though it is available for non-rooted devices, the features are limited in nature.

Another of the best online Android game hacking app is Lucky Patcher. It is a very popular app for the Android platform online gamers.

Pros: it removes the annoying ads in the middle of the games which are very much distracting. One can also remove undesired system apps, to create a backup. The app is rated 4.8/5 by the users on the official website and has also been downloaded more than 1 billion times by the users.

Pros: SB Game Hacker app enhances the objectives of the game by increasing the character speed and helping the player win money. It is also usable to hack all the offline games along with some online games as well. This application is fit for both rooted and non-rooted devices. It comes with a very well explained tutorial app as well as its official website.

Cons- For the non-rooted devices, its facility is very less. It is not available in the Google Play app store.

Another free hacking app that enhances the performance of the games on Android devices.

Pros: it introduces new codes while the game is on from the background. One can modify the values and features of the game by using this app.

This app is very popular amongst the Subway Surfers and Temple Run players.

Pros- This app helps the player get unlimited access to keys and coins in the mentioned games. It makes in-game purchases free of cost.

Cons- It is usable for rooted Android phones.

This Leo Play Card is similar to that of the Creehack app. For the players who want to have more lives, more coins, gems, and enhance the level of the game.

Pros: It is available for rooted as well as non-rooted devices. With this app, one can have Android apps in purchase for free. Leo Play Card is the most used hacking app in the famous game Temple 2.

Cons- There is no permission to apply and use this game for online games. Also, it is not available in the Play Stores.

This is another in-built way to hack games on Android phones. File managers like Root Explorers, ES File Managers help to break and change the configuration of the games into the granular levels.

Pros: with the help of this feature, one can change the game difficulty levels, game prices, resources, and initial charge of the money.

Cons: This is only possible for a rooted Android phone. It changes only in the offline versions of the games. To use this feature, the device needs to have certain file types like .db and .sql databases without which the hacking is not possible at all.

These android Game hacking apps make certain changes in the games that it becomes easier for the players to cross difficult levels and proceed through the game with enhanced pace.

Above are the most favorite game hacking apps for Gamers to use to make your gaming experience enjoyable and relaxing.

ABOUT US
Vintank.com is the online media platform about Business, Technology, Entertainment, Lifestyle, Fashion, Health, Digital Marketing and other categories.
Contact us: [email protected]gmail.com
FOLLOW US
©